I would like to thank Michelle Obama for helping me inaugurate this blog.

A few weeks ago, I had one of those brilliant moments –  you know the kind I’m talking about. Time stops, sound dims and you see that BIG IDEA literally hanging right in front of you; crystal clear with a klieg light drop shadow. For me, a previously messy tangle of missed hopes, dreams and opportunities suddenly did an about-face and revealed itself as the perfect plan. And in a moment, I understood EVERYTHING.

By the next morning, however, I’d misplaced the blueprint. I hate it when that happens…

I was having dinner at Nizza, a lovely “Riviera bistro” in my neighborhood (Hell’s Kitchen, NYC.) Gerry and I are recent acquaintances. I met him through my long-time friend John, who’d been singing Gerry’s praises for years. Since I’m an actor/singer/writer and Gerry is a composer/arranger/accompanist, John thought we’d have a lot in common. He was right. And now Gerry and I are having dinner to discuss the possibility of working together on a new show idea of mine, RIPE.

Following appetizers — and one kick-ass Hendrick’s martini — we start to discuss the show. Now even though I’d chewed on this idea for years, I couldn’t yet spit out the PowerPoint version. So while I struggled to explain my premise to Gerry, I found it necessary to pull out all my highlights, history and hopes and set them on the table. Gerry’s an agile guy. He doesn’t trip over the landscape. Finally, I finish. He leans back and says, “Some time ago I made a decision to only work on shows that truly interest me. This idea fits right in my wheelhouse.” It’s agreed. We will work together. Cue the orchestra, the overture begins…

Now, since I’d tossed all those creative balls in the air, by the end of the evening a few were still bouncing. And that was when the magic happened — when everything aligned. And I knew in a moment the way for me to create this new show was to blog about it.

Over martinis on Ninth Avenue the evening before, the idea had sounded clear as a bell. By the next morning, I was Ethel frantically braying at Lucy, “Honey, what was our plan again?” Still, I couldn’t shake the determined feeling that what I’d arrived at over dinner was the way to go. My task now was to locate a creative particle accelerator somewhere inside my brain and get those freakin’ atoms to behave.

The following week, all I did was think. I ruminated. I pondered. I _____ (insert heavy-handed synonym of choice here.) [Ed. Note:This blog will occasionally be interactive. Keep shoes tied for safety.]

“Maybe,” I said to myself, “if I tidy up, sweep some of the administrative crumbs aside, things will start to roll.”

So I secured my domain name (www.ripeproject.com). I registered for a two night “How To Blog” seminar at Gotham Writers Workshop. I Googled “Best Blogs of 2011” and read through the listing complied by Time Magazine. As a blog virgin, I began to fear I needed some mountain-climbing equipment. The learning curve looked mighty steep. Still none of this regenerated the missing blueprint.

So I tried NOT thinking about it. I picked up a book and read it through in one night. It was an okay story, but a lousy book. So I tried another. [Ed. Note: my one bedroom apartment could function as the library for a tiny town. Books will be mentioned.] This second book, LITTLE BEE by Chris Cleave was an aching story by a tantalizing writer and it set everything ringing – my ears, my mind and my heart. Even though it had nothing to do with me, it was all about me. The atoms were stirring again.

Tonight, as I opened my mail box, I saw a letter — a long, elegant white envelope. Where the return address should be, just two words embossed in blue: Michelle Obama, address implied. Now, dear reader, I know this is an auto-generated mail piece. You know this in an auto-generated mail piece. And we both know that the First Lady couldn’t pick me out in a line-up. Even so, for just a second my brain burbled happily, “Oh, I got a letter from Michelle Obama. Sweet.” 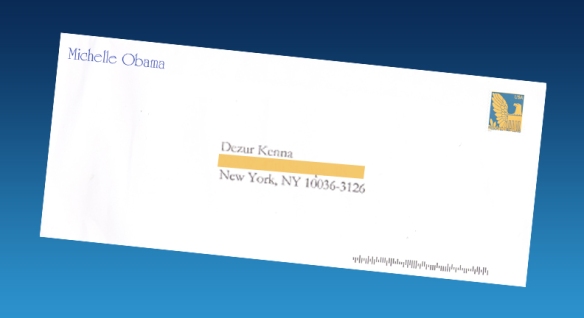 As I gracelessly huff the three flights to my apartment, I stare at the envelope and the diatribe begins.

“Michelle Obama is younger than you are, has a great pair of arms and rocks a sweater set. She’s an accomplished attorney, the mother of two gorgeous, intelligent children and married to the President of the United States.”

The afterglow of Michelle’s postal attention fades before I hit the first landing.

TRACK TWO: Peggy Lee sings Is That All There Is?

“How did she do it? How did Michelle Obama create THAT life while I created — um, mine?”

The compare/contrast is never pretty but it’s a recurring theme for me. Maybe this explains my television addiction. It’s much easier spending Thursday nights with Michael Weston and Sam Axe tactically tripping the matchheads of their scorched Miami lives than actually dealing with my own. Throw in a DVR, I officially cede control.

But as I reached my apartment door, I remembered Gerry and the dinner and my project and suddenly I had a handle to grab on to. And I realize — I see the blueprint again — looking for all the world like a white envelope from Michelle Obama.

So, this project. My project. For several years it’s been little more than a title: RIPE. Evocative, I’m hoping, for me as well as the audience. RIPE will be a journey through story and song investigating what’s involved when you finally step up and live your authentic life.

Near the end of that dinner, Gerry had posited that perhaps this blog could try to illuminate the creative process – something that intrigues and confounds many, even those of us in the thick of it. Just the reflective task I was looking for, explaining me to myself.

So thank you, Michelle Obama, for helping me to launch my first blog and my first post. I haven’t opened your envelope yet, but I will. I wanted to take a picture for this posting (Doesn’t it look significant!) I have a feeling I know what’s inside. A request. For support. And there’s the creative for you, folks. It happens in the everyday. This envelope, seeking support has provided it to me instead. Without even revealing its soft chewy center, it’s helping me uncover mine. This might not have worked for everybody. But it did for me.

So I invite you to tag along for the ride. And now a toast to two women – Michelle Obama and me. We both have some extraordinary qualities. And by the way, I have this funny feeling that just like Gerry, Michelle and I are destined to become good, good friends. Hey, you never know…