No, this is not a tale of mammograms, or the movie of the same name from last year which no one went to see. And it sure ain’t a chronicle of my inebriations past (unless we’re talking the morning after a family-size bag of Kettle Chips.) What this is is a status report on one of my current TV passions.

With their move to Saturday nights at 9pm (starting this week) it’s clear the hammer is about to drop on Ivy and Karen and Tom and Julia and Derek and Eileen. Yes, boys and girls, I’m talking about that full on fan letter that supposedly pulls back the curtain on the Great White Way — NBC’s SMASH.

Out of the mind of Steven Spielberg and creatively birthed by Theresa Rebeck (one of my favorite playwrights), the first season of SMASH generated lots of buzz and a flock of die-hard fans. But crappy ratings.

Me? I’m there watching every week. As television musicals go, this ain’t no COP ROCK (apologies to that other Steven – Bochco – though I applaud his effort.) Smartly recruiting forces from the actual Broadway community lends an incomparable level of craft to SMASH, despite the necessary evil of compressing the time and process of creating a Broadway musical into fifteen 42-minute TV dinners. Add to that the multiple layers of television and film experience involved and, baby, you’ve got yourself a show that works (sometimes…)

Last season while I enjoyed many of the characters and could swallow most of the storyline, I did take exception with all those fully costumed, choreographed and well lit workshops. (No, I’m not referring to the dream/fantasy sequences.)  I have never attended a workshop with such incredible production values. Or seen one in a rehearsal space that bright and clean. Everyone’s usually wearing their own clothes and still on book. But I’ll issue a creative license on that point. After all, over the years I managed to embrace such NY shows as FRIENDS and THE GOOD WIFE, despite the fact the wardrobe and apartments their characters inhabit are a total urban myth.

While we’re on the subject of real estate, can I get an “are you kidding me” on the size of Tom’s apartment? Julia’s — maybe, since it’s in Brooklyn. And that penthouse where they installed Derek — it’s too painful to even think about. However, when the show wraps (which appears to be soon), could somebody get me a broker’s appointment to rent Eileen’s “downsized dump”? It’s just perfect!

Back to the story — does the business of show as seen on SMASH ring true? Caveat here, my opinion is filtered through my vast personal Broadway experience — in other words, three years bartending in Broadway houses, several creative team call backs for long-running musicals and one four-month audition process that almost had me treading the boards with Vanessa Redgrave (another post, perhaps…) So, dear reader, snack on this story with as much salt as your taste buds require.

Though I can’t technically call myself a Broadway Baby, over the years I’ve had plenty of friends who are. Despite this connection, and despite the vicissitudes of portraying live theatre within the confines of a TV series, I continue to tune in each week, fingers crossed. So that says something.

I’m sad to learn that the newest Law & Order casting carrot for NY actors may be no more. I really thought this time I had a chance. I’ll admit, over the 20 plus years the legendary Dick Wolf series shot here in the city, all I managed to book was background on two episodes. But as they say, it’s never over if you won’t give up. Or something like that.

After the flush of Season One I started planning my attack. SMASH — just like LAW & ORDER — shoots everything right here in New York. So last summer, I took it as a sign when this notice appeared on my block:

Dear Residents and Merchants,
We will be filming scenes for NBC’s second season of “SMASH” in your neighborhood on MONDAY, July 30th, 2012…

I live in what’s referred to as the “theatre district.” Times Square is a block and a half from my front door. My neighbors and I are used to production crews. Many years ago late one hot August night I returned home from work to discover MONEY TRAIN had transformed my entire block into a winter wonderland. It looked so real that, despite the 88 degree temperature, I felt a chill. Another time, I was sitting in a movie theatre watching the 2009 remake of FAME (not by choice, I feel compelled to explain.) Suddenly there was my apartment building on the 30 foot screen, at least triple its normal size. May I say that proved to be the high point of the film for me… 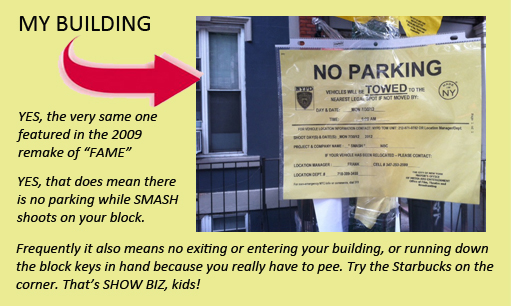 SMASH shot on my block for several days and didn’t really impede my existence. In fact, it was kind of fun. I kept hoping to see Megan Hilty or Katherine McPhee carefully descending the steps of any one of the giant corrugated Kleenex boxes known as production trailers which lined my street. My friend, Eric did hear Megan rehearsing a duet as he passed by late one afternoon. Alas, no sightings.

So a couple of weeks later, in a completely different neighborhood (where I work in Chelsea), as I left the office one night, a familiar notice was dotting the block: 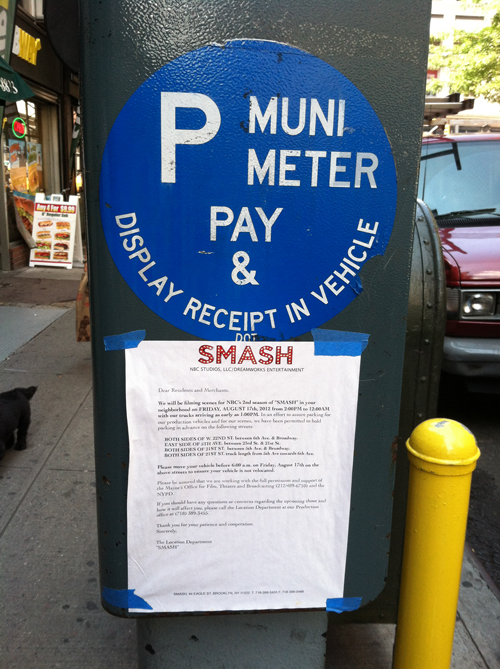 I did a quick 180 to see if it was Ellis trying to gaslight me. (Poor, Ellis, we hardly knew ye. Although, oddly, that was enough.) Nope, no Ellis. And no Jerry Rand, the reigning villain of the television theatre family this season (played by Tony and Pulitzer Prize winning playwright, Michael Cristofer who just happens to be the brother of a former boss of mine. Six degrees…) This notice was genuine. SMASH was not only shooting on my home block, they’d followed me to work! Odd or opportunity?

Oh come on! Clearly, the serendipity of these shoots could not be ignored. Here it was, my way into SMASH. I just needed to interface with someone, anyone from the SMASH crew, and get my butt on that show. But who? And how?

As I strolled toward my office the fantasy began. I casually pass a trinity of SMASH folk engaged in a frantic (though highly unlikely) conversation.

“What ever will we do?,” Casting Director says to the Producer, “There’s a police incident on the Number 6 train. Our character woman is stuck on the subway.”

“You’ve got to be kidding,” Episode Director explodes, “We’re just about to shoot that seminal scene inside the Broadway theatre bathroom and I need that Ladies Room Attendant on set NOW! She’s crucial to our story arc.”

“There goes my budget.” sighs the Producer and they fall into a worried silence.

This is it — my chance!!  I take a breath then stop in front of them, ready to pull my best Claudette Colbert, IT HAPPENED ONE NIGHT hosiery adjustment. (Okay, I no longer submit to shoving my legs into nylon casings, but this is my fantasy so go with it.) Just as I’m about to seductively straighten of my seams, back in reality I trip on the sidewalk. I glance around the real world. No Director. No Producer. My only possibilities seem to be a couple of gaffers, a best boy and a woman from hair and makeup who’s looking pretty cranky. Not exactly what I had in mind so I continued toward my office.

Suddenly I saw this:

All right! With my new-found knowledge, that day at lunchtime I decided to head east which took me right past Megan’s trailer. But no action. I left work early that day but returned in the evening to finish a project. Upon my return, my taxi dropped me on Fifth Avenue right in the middle of a familiar crowd. Tourists with cameras behind red velvet ropes: a genuine “shoot sighting.” I glanced across the avenue and saw the production set-up.There was lots of activity — clearly they were just about ready for a shot.  Feigning nonchalance, I tried to snap a picture. This was great, perhaps Megan was about to leave her dressing room on her way to the set. I scurried over to check… 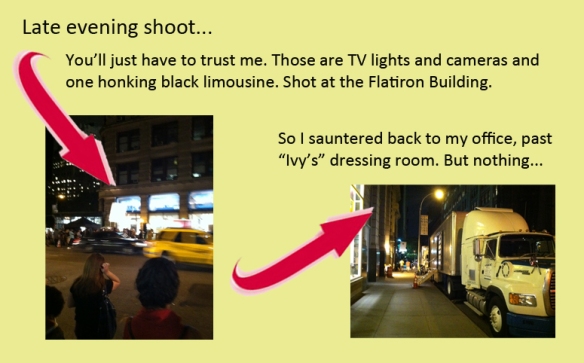 Alas. I continued upstairs at my desk and I dialed my friend, Eric. Before I could spill, he said, “Guess what?”

“I was just walking down your block,” he continued, “…and decided to drop by Kathy’s [a friend who also lives on the block.]  And guess who was sitting on her stoop?”

“That guy who plays the composer on SMASH, I can’t think of his name right now…” he paused, “…and the blonde, Megan Hilty.”

“Wait, wait. On my block? You saw Megan Hilty on my block?”

“Yeah, sitting on Kathy’s steps. Both of them. I had to ask them to move so I could get in the building.”

“Hold on, you’re saying SMASH is shooting on my block?”

“And Megan Hilty is there?”

“I believe that’s what I said.”

Dammit. How and why was Megan Hilty 25 blocks north of her dressing room? Who was shooting on Fifth Avenue? My mind was churning. Eric continued.

“I welcomed them to the neighborhood and told them we were happy to have them shooting here. Mentioned they were both terrific in the show, but I didn’t want to bug them while they were working. So I said goodnight and stepped inside.” Classy guy.

“Oh, you know – thank you. They were very gracious and seemed pleased by the compliment. It was kinda’ fun to see them just sitting there on Kathy’s front stoop.”

I quickly flipped the possibilities, but knew I could never make it home in time. Of course, ultimately it wasn’t necessary because the pattern was now clear. The universe had finally revealed my truth: the SMASH crew was my new neighbor. My television BFF. At work, at home. I’d be seeing them again. And next time, by God, I’d be ready.

Well, since Season Two filming completed without me and the news of the likely cancellation of the series, it looks like I’m back to my LAW & ORDER reality. Always the bridesmaid. Never the bride. Perhaps I should try a new wedding planner. I’m open for recommendations…

WHAT’S IT ALL ABOUT, ALFIE?

The RIPE Project was born to explore the creative process as I build my new show, RIPE. Anything that sparks the brain cells is fair game for a post.
For the Reader's Digest version of this, please click on "MISSION CONTROL STATEMENT"
For deep background, read Post #1: Pennsylvania Six Five O-O-Ohhh...

© 2011 DEZUR KENNA and The RIPE Project ALL RIGHTS RESERVED

Delighted if you find something funny, interesting or annoying enough to share. Unauthorized use and/or duplication of this material without express and written permission from ME is strictly prohibited. Excerpts and links may be used, provided that full and clear credit is given to DEZUR KENNA and The RIPE Project.
Loading Comments...