To paraphrase the iconic Carol Anne, she’s back… 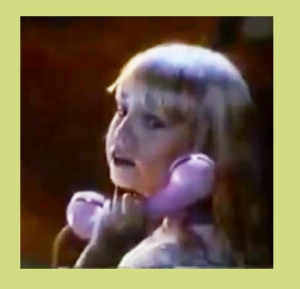 No, I don’t mean me — although it is true RIPE and I are finally on the move again. (Yippee!) I’m actually talking about my new BFF. You all know her. I’ve mentioned her here before. The woman I would most love to sit down to lunch and talk low-cal, high fiber recipes with. The gal whose opinion I am curious about — does she watch the THE GOOD WIFE primarily as a law procedural or more for the character-driven drama? And more importantly, is it BREAKING POINTE or BUNHEADS? Or both? (There’s no denying the lady likes to dance, right?)

Of course I’m talking about that first lady of sweater sets, the one who lately has graced every taping from LETTERMAN to LIVE! with KELLY (and dig that co-host of the week), where she actually jumped rope with aplomb. I’m talking about your friend and mine, Michelle Obama. 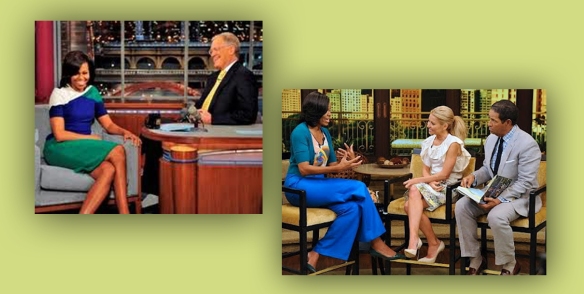 I’ve been hearing from Michelle quite a bit lately, we just haven’t managed to connect. There was another letter this week. And few recent emails about a lunch get together. But we ran out of time. She’s been busy. I’ve been busy. Sometimes, that’s just the way it goes.

I haven’t written back yet, but this won’t sully our friendship. Nope, cause I know she’s got my back. Well, strictly speaking that’s more feeling than fact, since we haven’t actually met. But everything about her points toward the positive. It’s almost like we’re having a conversation when I read OBAMAFOODORAMA, the Blog of Record About White House Food Initiatives, From Policy to Pie. And you all know my food focus of late, so I relish the good info.

Last fall, when I received that first letter from Michelle — the one that helped inspire my first post on THE RIPE PROJECT — it was totally unexpected and just the kick I required. Actually that reminds me of the time I just couldn’t get my head around cleaning and organizing my apartment. I procrastinated. And procrastinated. Then finally, when I could stand it no more, I cleaned my apartment. [Ed. Note: For those of you who are home – not apartment – dwellers, this reference may lack a certain punch. Here’s a little game: take at least half your furniture and belongings and move them into two contiguous rooms of your house. The rest of the space is off-limits except as a storage facility for the overflow, for which you pay $225 a month and can only enter from 8 am to 6 pm. Now, go ahead: live and be neat about it.] Anyway, once I finally broke down and just cleaned the place, you know what happened? It wasn’t that big a deal. I had a much more enjoyable living space and I found a $100 bill. No, it wasn’t magic. I’d always had the money. I’d simply lost track in all the self-created chaos.

My point is, same thing with Michelle. There I was last August struggling for clarity, trying to locate the lost kernel of my idea for this blog when — voila!!! Une lettre de la Première Dame des Etats-Unis! It stopped my in my tracks. At first I was stumped. Compared to Michelle Obama, why should I even try. But a moment later it became just the creative compass I needed. As I compared the map of my life to the map of Michelle’s, at first the differences seemed insurmountable. Eventually Michelle helped orient me to who and where I am and where I want to go.

So take a few lessons in living from our First Lady. Eat healthy. Stay active. And w

rite a letter to a friend. Help keep the US Postal Service in business (it’s nice receiving something other than bills.) Now that we have the Forever Stamp and you can buy them online, there’s no excuse. And won’t your Grandmother be proud?

WHAT’S IT ALL ABOUT, ALFIE?

The RIPE Project was born to explore the creative process as I build my new show, RIPE. Anything that sparks the brain cells is fair game for a post.
For the Reader's Digest version of this, please click on "MISSION CONTROL STATEMENT"
For deep background, read Post #1: Pennsylvania Six Five O-O-Ohhh...

© 2011 DEZUR KENNA and The RIPE Project ALL RIGHTS RESERVED

Delighted if you find something funny, interesting or annoying enough to share. Unauthorized use and/or duplication of this material without express and written permission from ME is strictly prohibited. Excerpts and links may be used, provided that full and clear credit is given to DEZUR KENNA and The RIPE Project.